Right, well I can't keep starting every post with an apology for tardiness, so I'm just going to dive straight in with this recipe.

Lemons and citrus are, as a whole, my favourite dessert flavours ever. Sure, chocolate and berries and all other things good and nice in the world are great, but there's just something about citrus. Lemon cupcakes over vanilla, always. Lemon biscuits instead of chocolate chip. Tarte aux citron? Heaven. That reminds me that I really do need to make/post up that wonderful Roux brothers tarte aux citron which has been my go-to for years now...but that's for another day, when I have more time to actually have to go through pastry-making (things have been rather busy over here, unfortunately).

So instead, to amend the lack of citrus on this blog so far, let's get into this citrus cheesecake. It's another super-easy set cheesecake, but I promise you that unlike the previous chocolate-based cheesecakes, this is light, tart, and very zingy. We served it up at a dinner party a while back and it was almost palate-cleansing, since I've really cut down on the sugar due to my own preferences and wanting a fresher citrus taste rather than sweetness. 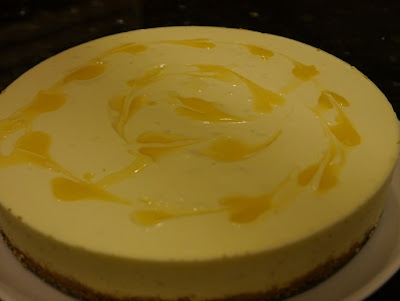 First blitz your gingernut biscuits to a fine crumb in a food processor. Mix together with the melted butter until it reaches the texture of wet sand- it should just hold together when pinched.

Grease a spring-form cake-tin with a little butter, taking care to grease the sides well. If you're worried about sticking, just line the sides with greaseproof paper. Once your tin is prepared, firmly press the biscuit crumb mixture into the base. It should be tightly packed into the base.

Place the tin and biscuit base into the fridge for later.

Next, using an electric hand-whisk or stand mixer, beat your cream cheese until it has softened and is smooth. Beat in the sour cream, followed by the cream, until the mixture is well combined and smooth. Then add the juice and zest of your lemons and limes. If you want a completely smooth texture to your cheesecake, you can omit the zest but I think it adds a little extra fragrance that I like (and I don't mind the bits).

Then beat in your sugar until well combined. Do have a taste- I'll admit that the citrus with the addition of the sour cream really does make quite a tart cheesecake, however I like that it isn't overly sweet. If that isn't quite your thing and you prefer a sweeter cake, then at this point you could add in extra sugar to taste.

Once your desired amount of sugar has been beaten in and is well incorporated into the cream cheese mixture, turn to your lemon curd. Two options here...

Melt down about a quarter of the jar (yes, I'll shamefully admit that I did not make my own lemon curd at this point. But do use homemade if you have it at hand) in a saucepan over a gentle flame. Don't let it melt to a wholly liquid state, but it should be runny enough to work with.

It's at this point that I'll admit that I did not do the following step. I wholly intended to marble some lemon curd through the cheesecake mixture before putting into the fridge to set. I forgot.

However, I did at least remember to use the lemon curd for decoration...

Using a teaspoon or pippette, dollop spots of lemon curd over the top of your cheesecake like so... 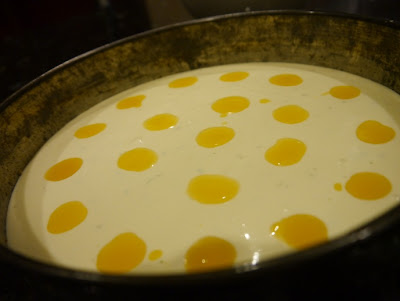 Then, get yourself a chopstick or some other suitable utensil and gently drag it through the outer ring of spots in one fluid movement. Repeat with the inner circle until you get something that looks like this: 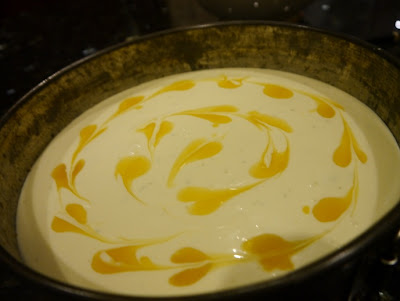 Sure, not completely perfect...but still quite pretty, no?
Cover with clingfilm and place in the fridge to set for at least four hours. Let it sit for a couple of minutes before serving, just to loosen up the sides so that you can pop it out of the tin without any issues. 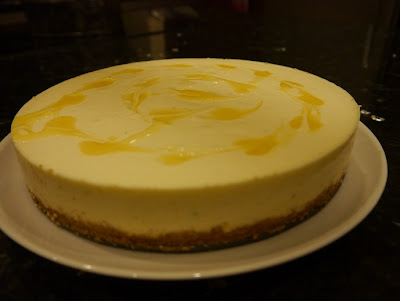 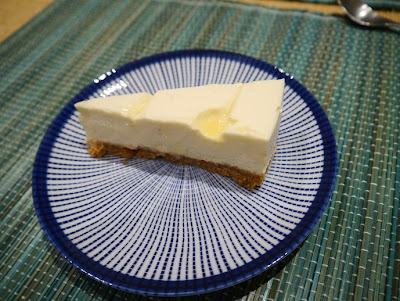 Serve up with the remainder of the melted lemon curd as a sauce, or on it's own. Enjoy!
Posted by Alia at 02:53

Alia
An enthusiastic food-obsessive. Recently moved back to Malaysia after many years in the UK.